Animating vowels: O, U, and Y 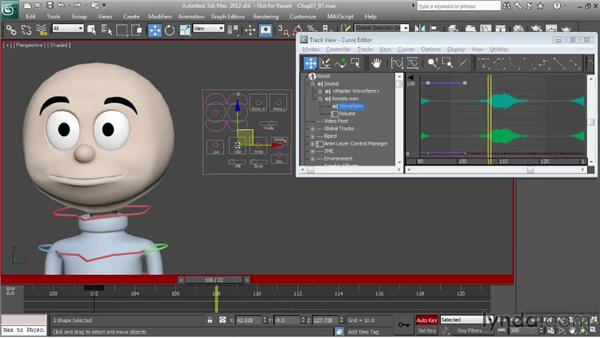 Join George Maestri for an in-depth discussion in this video Animating vowels: O, U, and Y, part of 3ds Max: Character Animation.

Now that we understand how to animate a few vowels, let's go ahead and animate the rest of the vowels. We are going to animate O, U, and Y. Now a lot of these vowels have the purse-lipped mouths, and so these are all kind of related to one another. Now I have my Curve Editor already set up so I can see my waveform, and I have my timeline set up so that I have my first vowel up. So let's go ahead and play that. (Character speaking: O, O, O.) So that's the letter O. So O is pretty straightforward.

So let's see how that works. (Character speaking: O, O.) That's looking better. It has a little bit more oomph at the beginning. But if you think about it, O actually ends with more of an oo sound than a closed mouth. So let's add one more little layer in here. So I am going to go ahead and grab that Dialog slider here, and if you notice-- (Character speaking: O.) It just kind of goes back to neutral. But if we want we can go to more of an oo sound here--so at frame 89 I am actually going to pull it up to the top right corner of the slider, and it's going to go to oo and then to neutral.

So 81, it's top left corner, which is the O sound. Top right corner at 89 which is the oo sound. The two are very closely related, and then it tapers off to zero. (Character speaking: O, O, O.) So that looks a lot better, and that's a lot more realistic. So remember with the oo sound, you can open the jaw to give the voice a little more volume, and then at the end, you can fade to an oo sound if you have enough time, and that will also add to the believability.

So let's go ahead to the next one. I am going to again Ctrl+Alt+Right-click. And let's go onto our next sound here, and that ends somewhere around 120. So I want to make sure I have 120 visible, and then I am going to go ahead and make my Start frame somewhere around 100. Okay, and this next one should be U. (Character speaking: U.) Now if you notice, this actually has kind of a tapered beginning and a tapered end. So it's not like A or I, which I would call hard vowels where the mouth opens really quickly.

But this one, the mouth kind of fades in and fades out. So this is a softer vowel than an A or an I. So let's go ahead and play this one more time and understand what the vowel is doing. (Character speaking: U, U.) So it's going ee-oo, okay? So ee-yoo. So it's going to actually start off with more of an E sound and end with an oo sound. So this starts right around 103, so let's go one frame back to 102, set a neutral key, and then let's go ahead and set an E.

(Character speaking: U.) You can see how this is gaining volume to about 108. Somewhere between 108 and 110, it's building in volume. So when it's built up its volume, we can put in our first phoneme shape, and that would be an E sound. So let's go ahead here and give it teeth here, E, and open up the jaw there. (Character speaking: U.) And then it goes pretty quickly to an oo sound.

Now remember, U is kind more like an ee-oo, so you might want to start with a wider mouth, fade it in, and then fade out on the oo sound. Now we have one more vowel to do, and that's going to be Y. So let's go ahead and set our End frame to somewhere around 150 and our Start frame to let's say 124-125 and listen to Y. (Character speaking: Y, Y.) So Y is another soft vowel. It's a lot like U. You can see it builds slowly and then fades slowly as well. Oo-I.

So oo-I actually starts with an oo, and then it goes to an I sound. So it's oo-I, oo-I. So let's find the start of this. So 126 is actually its start, so it's actually starting pretty quickly here. So I am going to go ahead to 125, the frame before where I hear that sound coming in, set a neutral key. (Character speaking: Y.) So we can hear. The I is coming in around 130.

So 128 or so I want to have that oo sound here. So now-- (Character speaking: Y.) Okay, and then 130-131 I want to have the I. Okay, now remember, I is aa-ee. So let's go ahead and zero out of the oo, Shift-select that keyframe, drop it in so it zeroes out, select the jaw, and open that up. Now one of the things you're going to notice here is that I only have two keys.

I have a key for the jaw here at 125, and then again at 131. (Character speaking: Y.) And you can see that it actually adds a little bit of a disconnect here because the mouth is opening over that oo, and it's really stretching it right there and we really don't want that to happen. So again, I am going to go ahead and Shift-select and copy that neutral key to 128. (Character speaking: Y.) So that way the jaw doesn't start opening until I have a good oo sound, and then I-ee.

So I am going to keep that mouth open and fade it into an E sound. So I am going to go up to about 135, kind of drop my mouth closed a little bit, and then on that dialog slider, again I want to go ahead and just let those teeth be shown here. (Character speaking: Y.) And then, of course, we want to fade out, which is again, Shift-selecting and copying those neutral keys.

So let's take a look at Y. (Character speaking: Y, Y.) So remember, for Y it starts with oo, goes to aa, and then goes to ee, oo-aa-ee, Y This really shows you how you can actually break down vowels into even sub-vowels, in other words, subcomponents. Y is not just one shape. It's a combination of different shapes, and this kind of sets us up a little bit more for a more complex facial animation.

But remember, with any vowel just try and sound it out and understand the shape that the character is trying to make.