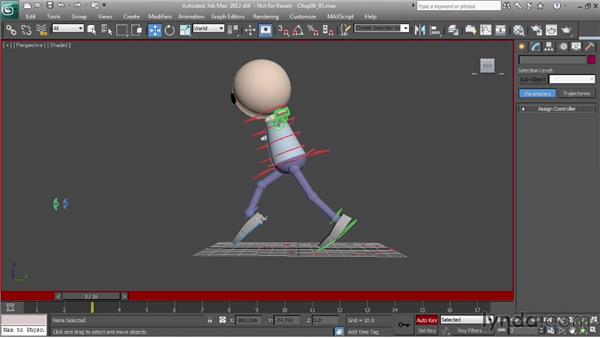 At this point we should have a basic motion of the hips and feet in place. We've done the passing position as well as the extended position. So let's take a quick look at what we've animated. So I am going to go ahead and press Play here. And as you can see, the character looks like he's running, but it feels a little bit off. And the reason it feels off is because the character really doesn't have a sense of weight. Remember, in a run the character throws himself off the ground, leaps through the air, catches himself, and then propels himself forward, but we don't really have that yet with this run.

Let's take a look at the motion of those hips. At frame 1, he is about to take off, and when he leaps in the air, well, a leap implies that he's kind of throwing his weight up in the air. But if we look at the motion of the hips, they are actually moving down, and that's just because of the way it in-betweens these two poses. So we need to add in one more pose. And the same thing is happening on the other side. So when he catches his weight on his foot, the weight should continue to move down before he moves it back up again.

So let's go ahead and add in that motion. Select the hips, go into Move mode and make sure I have Auto Key turned on and let's go to frame 3. So frame 3, he should be leaping in the air. So I am going to go ahead and move those hips up just a bit. So now it feels like he's at least kind of leapt through the air, and now he wants to catch that weight and cushion. So frame 7 we are going to have a cushion position very similar to a walk.

So with that we should have much better sense of weight, and you can already start to see that. But when we move the hips, we also need to adjust the feet to compensate, because the feet also aren't in the right place. So let's go through this first step here. So in that middle position, again, he's leaping through the air, and this foot really isn't reflecting that. It's really, again, just doing a straight in between, between this pose and this pose, but we need to make sure that that foot reflects the fact that he's leaping through the air.

So we are going to go ahead and move that foot up and rotate it a bit, so now we have kind of cocked that foot so that it now feels much better when it sets down. Now when the foot actually sets down, it will set down on the toes. Remember, when we run, we tend to run on the balls off our feet. So let's go ahead and grab that heel control here. And let's go ahead and lift that heel up. So in order to make that happen, I do need to have an in-between here.

So one, I will make sure I have a keyframe of 0 at frame 3. So the easiest way to do that is to select a keyframe at frame 1, hold down the Shift key and drag that. And now let's go ahead and just rotate that heel up just a bit, so it looks like he is catching the ground with his toe. Then as he pulls forward, then his foot flattens out. And again, we can do that just by selecting this keyframe here at 3 and Shift-dragging it so that it's flat.

So now that feels makes it feel like he's really catching the ground. And again, as he goes through this pose here, I want to make sure that that foot is on the ground and then it lifts up again. So as you can see, that gives a much better motion, and we can certainly do that on the other side as well. I am going to grab my foot here, and then right here I am going to go ahead and rotate that foot and bring it up so that it feels like he's about to catch the ground. And right here you can see I don't have keyframes for that heel connector here.

I've got one here at frame 5, so I can Shift and drag that 0 key for the heel to make sure that it's locked down. And then at frame 13, I want to rotate it up, and then as it catches the ground I want it to flatten out. And again, what I am doing is I am just selecting that zero key, holding down the Shift key and dragging it and I can do that twice here. So now I've got a much better sense of up/down motion and a much better sense of weight. Let's go ahead and rotate that so you can see it a little bit better.

So at this point we should have the lower body animated. We haven't really done anything above the hips, so let's go ahead and move on to the upper body and start to finalize this run.