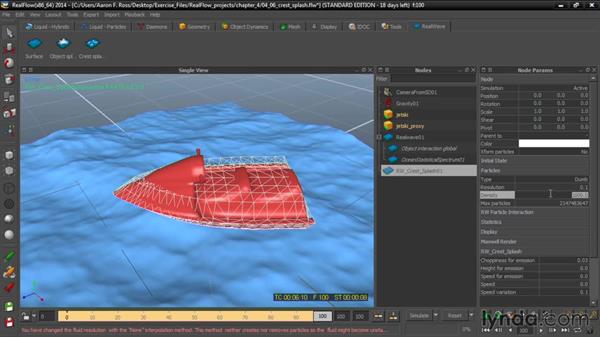 - RealWave can generate foam on our ocean, based upon the choppiness of the waves, and the foam will be in the form of standard particles. To add that effect, go to the RealWave tab, and you'll see Object Splash and Crest Splash. Let's add Crest Splash first. Just click on that, and it's automatically connected to the RealWave object. In the node parameters here, we can open this up and just change the color here to white, so we can see it a little bit easier.

And we can reset the simulation and see what we get. However, there's one small issue. When you click reset, it temporarily breaks the connection to the SD for these objects here. So, their cache kind of gets lost. I'm going to click reset, and click "Yes," and show you if I press play here, that cache is not loaded. But I can load it very easily, just by clicking this button here, "Update Time Line Cache," or by using the "alt u" keyboard shortcut.

Just click that, and it loads the cache automatically. And now, what we're seeing here is the cache-playback, rather than live simulation. All right, now, let's simulate the Crest Splash, just with default parameters here. When I click Simulate, we can click through this warning message, and we don't really see anything appearing. So, our crest splashes are not appearing. We can generate them by playing around with some of these parameters here.

And while I'm here, I'm going to set the speed to 0.0. That's going to cause the particles to just lay flat on the surface and not fly outward. Set the speed to 0.0. Before I run another simulation, I can change a few more parameters up here. In the particles section, I'll reduce the Resolution, so that it's not quite so heavy. Set it to 0.1. And the Density is the thickness of the fluid, and we can make that thicker than water.

Water has a density of 1,000. For foam, I'll set it to a value of 5000.0. Then, scrolling down a little bit, we have a section labeled RW Particle Interaction. In that section, we have some important parameters. Upward force is a force that's supposed to counter-act gravity. I don't really need that in this case, so I'm going to actually set that to a value of 0.0. We have Destroy on depth. This is a method for killing particles when they fall below the RealWave surface.

And I'll set that to a value of 0.1. Then, On surface is a very important parameter. This has to do with what will happen to a particle when it collides with the RealWave surface. It's defaulted to destroy the particles, but I want to keep them. I want the foam to float on the surface. I'll click On surface and set it to "Place," and then give it some Friction, so that those particles don't just slide across the surface, but they more-or-less stick in place. Set the Friction to 0.5.

And then the last, most important parameter here is Hit force. Hit force causes the particles to deform the RealWave surface. And I really don't want that in this case. I'm going to set that to 0.0. These particles are not supposed to influence the RealWave surface. They're just supposed to be generated by that surface. Okay, so that's a bunch of parameters that I've set. And now, with all those done, maybe I can go into the display section here, and just change the Automatic range to off, and give it a Max range value of, let's say, 0.1, because these particles are not going to move very quickly.

All right, so, let's try that. I will go ahead and reset. And re-simulate. And you can see now, we're getting some foam. Pretty cool. And the foam is sitting on the surface. It's not falling through too much. If we go below here, we'll see that some are falling through, but most of them are actually staying on the surface pretty well. The particle simulation took about two minutes to calculate.

And that's because the particles are kind of living forever. They're building up in this scene, and there's nothing to kill them. We'll rewind this and play it back, and you can see that those particles are just kind of accumulating on that surface, over our 100 frames of animation. In the next movie, we will kill the particles, based on their age.

4/6/2015
RealFlow is the motion picture industry's standard tool for liquid simulations. It's a standalone application that offers robust interoperability with most popular 3D programs. In this introductory course, you'll explore the powerful features of the RealFlow core application, and see how RealFlow is integrated into Maya and 3ds Max.

You'll learn how to create small-scale effects with standard particles, create free-flowing water effects with the Hybrido solver, and simulate open bodies of water such as oceans and ponds with RealWave. Author Aaron F. Ross also shows how to control interactions between objects and fluids with Caronte, the rigid- and soft-body physics engine included with RealFlow.
Topics include: