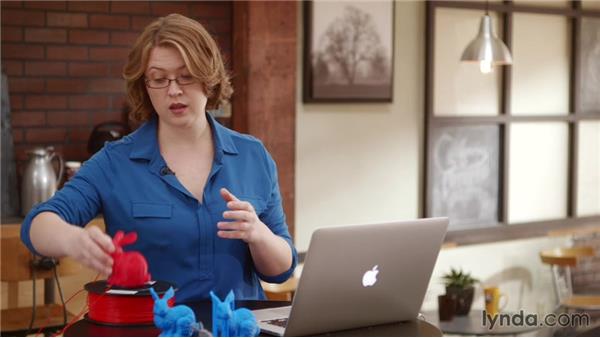 This is a 3D print from a filament based printer, the technology has a couple of different names. FDM or Fused Deposition Modeling, which refers to the original patented technology. FFF or Fused Filament Fabrication, which is commonly used by the RepRap community and other derivative desktop 3D printers. And PJP or plastic Jet Printing, which is another term that's sometimes used. So how does this technology work? Like a very accurate, computer controlled glue gun.

A motor pushes plastic filament through a hot nozzle. And draws 2D layers, one on top of the other to build the 3D design. Printer resolution is measured by layer height for this type of 3D printer. And the resolution is variable. It's measured in microns or millimeters. 100 microns is equal to 0.1 millimeters. Thicker, low resolution layers are about 300 microns. These layer lines are fairly course. But in a high-resolution print, with layer heights under 100 microns, the lines are much less visible.

You'll see this effect more prominently in areas where there are subtle slopes in your design. Most prints aren't solid. They're printed with an outside wall called a perimeter, and a pattern on the inside that's called infill. The amount of infill can be varied, depending on the use. This bunny has an infill of 10%. You might use less for a purely decorative object, or more for a functional part. Most consumer grade printers use generic filament. It can be purchased from a wide variety of vendors.

They come in one kilogram roles, and these cost about 35 to $70. How much can one role print? Quite a bit actually, and in this case, about 20 and one-third stand for bunnies that are about 100 millimeters tall. Each medium resolution print took about three hours. A low resolution print would have taken about two, and high res print maybe five to six. Commonly used plastics are ABS which is the plastic that Legos are made from. Or PLA which is a bioplastic that's made from corn.

Other experimental plastic include Nylon, flexible plastics like Rubber and High impact Polystyrene. Higher end printers require brand named filament and typically the cost is higher. Commercial printers typically use ABS and Polycarbonate engineered for a variety of mechanical applications. One of the main differences between desktop printers and commercial printers is how they handle support material. 3D printers build up objects and layers and they can't print in midair.

And so objects with overhangs like the ears on the Stanford bunny, can be more difficult to print. Commercial printers handle this by printing in two materials at once. The plastic in one nozzle and the second material in another that can be easily washed away after the print is finished with water pressure. Desktop printers are different. They often have one extruder and printing one material at a time. And so if we want to print this bunny, support material is required if the overhangs are over 45 degrees.

This design is actually right at that threshold working print with or without support material. The supports are designed to break away, and just need a little cleanup with an X-Acto knife. So who are these printers best for? The low cost of filament and the fact that no special equipment is required to remove support material make the desktop fused filament printers great choices for hobbyists, individuals, and schools. Businesses can also get a lot of value out of prosumer machines.

But may find that the commercial options are good choices as well. The prints are solid and durable. The quality and detail is pretty good, especially with the high-resolution prints. But if detail is your top priority, especially detail in very small parts. You might be better served by a different technology, like stereo lithography or material jetting. 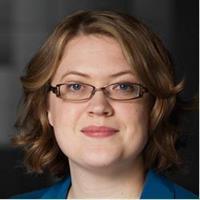 2/24/2014
There's never been a better time to try 3D printing. This course draws a roadmap for getting started with 3D printing (aka additive manufacturing), from choosing a printer to learning about 3D modeling. After surveying a variety of commercial 3D printing technologies (filament-based, laser sintering, and more), author Kacie Hultgren walks you step-by-step through a variety of 3D design tools, including 3D modeling and 3D scanning. You'll also learn how to repair designs so they're ready to print, with netfabb Studio, a 3D printing suite. This is a great course for both 3D printing novices as well as designers with existing modeling skills that want to enter the 3D printing marketplace.
Topics include: