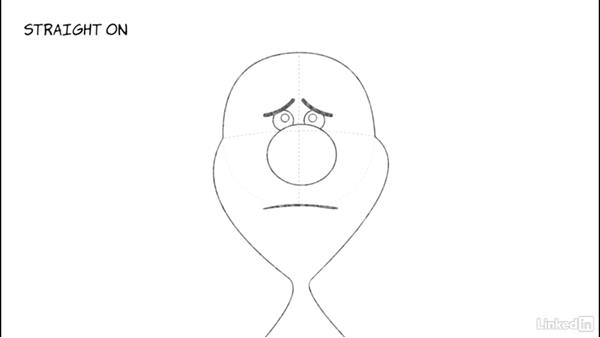 Join Dermot O' Connor for an in-depth discussion in this video Head articulation, part of 2D Animation: Tips and Tricks.

- [Voiceover] It's all too easy to fall into the trap of being timid when animating the head. Even in the days of hand drawn animation, junior animators had a tendency to avoid articulating the head. In spite of the fact that the head is an extremely flexible object. This is made worse with puppet based animation like Adobe Flash or Animate or Toon Boom Harmony. It's very common to see scenes with an up down settle pattern. In effect, the head is like a little spring. Whereas, in reality, the head's more like a ball socket and we need to be able to move past this cliche or pattern.

And so let's see how. The most obvious thing to remember is that we can pivot from the base of the neck and the base of the skull. So, I've marked these two pivot points with these red crosses and here I'm overlaying the images to give you an idea of the distance and spacing I used for this animation. So about from here to there. And here's the travel for the opposite side. So how far you can push your character before the designer model if you're working with a CGI or a 2D puppet might constrain this part of your animation.

But it's a good idea to have an animated character that can look good in an upshot and finally the down position be about here. Now let's look at the animation of this basic cross movement again and I've added dotted lines for the eye line and the center line to illustrate the degree of movement. And here again, without the dotted lines, so a little more natural. Next, we have the ability to rotate the head. Now this can be done from the neck or the base of the skull.

In this example, when I rotated the skull, I found it easier to use the center of the skull as the axis. So you can use whatever works for you. These are cartoon characters, so you can, if you want to pivot the skull from here or from there, your design, your rig might vary. That looks pretty good. So again, to break this down, here we have the range of rotation, pivoting from the neck, the red cross from there to here. And the same rotation to the opposite side.

I could have gone further but I wanted to give you a more modest example. So here's the pivot effect when using the skull as the axis of rotation. Again, note that I set the pivot point in the center of the skull but I could have used the base had I wanted to. So, whatever's most appropriate. So here's the animation with the dotted lines again to illustrate the eye lines and the center line.

And again, without. Another range of motion that's very useful to consider is a kind of a clock motion. And this allows your character to both rotate and pivot around any point of the clock that works best. So again, we're thinking about the ball sockets that we have at the base of the skull of the center of the skull that allows us this range of motion. So here are the eight positions that I used to create this animation overlay. Just to give you a general idea of the spacing of these different positions.

And here they are, one, two, three, four, five, six, seven, eight, back to the first one. And now repeat the clock animation again with the dotted lines and without the dotted lines. He looks pretty flexible. All that yoga came in handy. So we have these different kinds of motions from the base of the neck or the skull. We can also get great flexibility and looseness by combining them. So here, I have rotated around the neck and then pivoted the skull.

The dotted line should help you see what's happening. So, we combine and we stack these different kinds of rotations, we get all kinds of different options available to us. And here it is without the dotted lines. So, maybe it looks a little more natural. Hey, come over here, this way. So, you get the idea. So when we combine these different kinds of rotations and pivots into one scene what do we get? So here, I just took a few of my poses from the preceding sections and just put them together on the timeline to see what happens.

So you can imagine if this guy was talking. I don't believe that, no this isn't possible. You know, you can imagine any kind of line of dialogue that you want over this but you get the idea, there's flexibility happening here. This isn't a head on a spring by any stretch of the imagination. And actually, you'll notice too, I've pretty much locked the neck in place. He's not really moving very much from here. And even within that physical constraint, this scene feels quite loose. So you're already moving beyond the kind of, the prison, or the straight jacket of the tyranny of the puppet or the rig.

So, try to apply these principles of rotations, pivots and tilts to your character's head and hopefully you can break out of that trap.