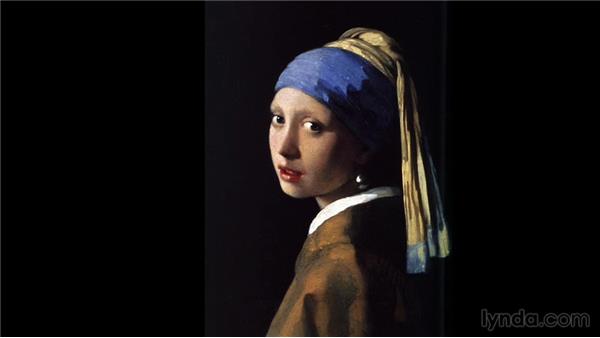 - Human beings pay attention to visual contrast and are drawn to it, so it's essential to learn how to use it to draw a viewer into an invented world. Hierarchy in an image is the order of priority for the viewer's focus. Establishing a hierarchy of contrast in value, vibrancy, temperature, texture, shape, and complementary relationships will provide a guide for the viewer to move around an image. You can nudge someone to read your image in a particular way, then you have the power to keep them looking and perceiving longer.

Establishing a focal point or area of highest contrast is the first order of business. So let's look at the focal points by examining where the eye travels through a Dutch masterpiece. Here's Vermeer's very famous Girl with a Pearl Earring. As we look at the painting, we can see that it has nice variation of values making it, let's say, easy on the eyes. We can track the value system because there is one, remembering that value is the relative lightness or darkness of a color.

Where is the focal point for you? How are you reading this image? I'll show you the path that my eyes follow. In this case, it seems clear that Vermeer wanted us to look first at the eyes, then down the contour of the face, then on the T of the collar and down the shoulder. He used the illusion of light to achieve a hierarchy of values. Now let's consider adding vibrancy to the mix. Vibrancy is the relative brightness or saturation of a color.

What we see is the vibrancy of color pulls our attention still to the areas of high value contrast, but a slightly different trajectory with more focus on the red of the lips and the darkness of the eyes. We tend to move around the whole face because our eyes are shifting between two places, not simply focused on a singular point of interest. The turban plays a more active role in getting us to the face. The value contrast works with the contrast of vibrancy and hierarchy of vibrancy to direct our eyes where Vermeer wanted us to look.

Instead of bouncing between the eyes and the shoulder, when seen only in value, we're tending to move a bit more around the form as a result of the contrast of vibrancy and the contrast of value together. Just for fun, let's add another potential area of contrast, that of temperature. Temperature is the warmth or relative coolness of a color. Contrasting hot against cool can create a hierarchy of contrast and a clear focal point in an image. Let's look at one of my favorite Golden Age illustrators, Maxfield Parrish.

The secondary level of contrast, the hair, draws our attention to the left, mirrored by the flowing drapery and mimicked again by the contrast of value and temperature in the clouds. The hierarchy is clear, female first, scenery second. The direction of hierarchy, what we look at first, second, and so on, is highly controlled by both temperature and value. In each of the paintings we've looked at, we've paid special attention to where our eyes travel throughout the piece.

I can see that hierarchy is not accidental, but well-designed by each painter. As visual image makers, knowing where to direct the eye of the viewer gives us greater control over our ideas and expression of visual language.

8/20/2013
Color is a fundamental element of our lives. Understanding how to use it for visual communication in a variety of contexts is essential for designers and artists. This course is about learning how to use color, not only to create more effective designs, but also to tell a story. Illustrator, professor, and author Mary Jane Begin explains how color intertwines with brand identity, how it affects the mood of a piece and directs the viewer's attention to areas of interest, and how it can connect images or create space between elements. She removes the mystery surrounding the color wheel and color relationships; shows how to layer, mix, and digitally alter color; and use light to integrate temperature, translucency, and contrast.

These lessons are applicable to a number of fields, including graphic design, photography, and illustration, and both traditional and digital media. Dive in and get a fresh look at color that is sure to revitalize your creativity and your work.
Topics include: