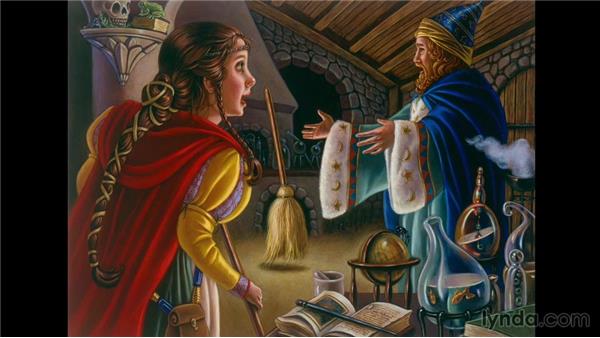 - Creating an image starts with an idea, often a small scribble on a piece of paper or a napkin or the back of your hand. If a few ideas were considered, one emerges as the best way to communicate what you're thinking. That idea is then refined and researched to make sure the drawing of the subject matter is understood both by the imagemaker and the viewer. When the idea takes shape, clear lines become important. As the image moves from your brain to the surface of something, the idea or concept begins to take shape.

A concept is a general notion, idea, or mental construct. At some point, the bones of the image, the drawing, or design is finished, and the color is considered. What color should I use is a question that you might ask yourself, and you want to be able to answer confidently. It's true that some artists might develop the color as they're figuring out the idea, but often the architecture of the design comes first. When I was working on this image for the classic tale, The Sorcerer's Apprentice, I had to answer the question, what palette should I use, not only for this one drawing, but for all of the images created for the book.

I had to think about the story that the color would tell and be consistent about it throughout. I wanted the story to be set in Renaissance, so I looked at paintings from that time period and studied all the palettes. The story seemed to me to be about the intersection of magic and science and the beginning of a new ways of thinking. I wanted the light to be dramatic, so I chose images that would be best explored with specific light sources and dramatic angles, to understand a value range that would work.

As the story is a cautionary tale for kids, I wanted the book to have a wide range of values, so my dark colors would be on the darkest end of the spectrum. For that reason, I chose to use acrylics because I knew that the color could be painted darker than watercolor alone. When considering the choices for important elements, like the girl's cape, I had to try to think of a color that would be symbolic, noticeable against the other colors, and yet still work with the rest of the palette. Red seemed the best choice as it represents, in the west, passion, danger, and excitement.

This is a girl poised on young womanhood, wanting to discover everything. The red cape reminded me of Little Red Riding Hood, who also had little regard to the consequences of her actions. I hoped that the other viewers or, in this case, readers would also make that connection. I decided that the sorcerer's cloak, another color meant to be noticed as a point of focus, should be a purplish blue, suggesting magic, royalty, and night sky. His garment is blue-green, the color of the ocean, and a peaceful tone meant to suggest that he is serene, an even-tempered mentor for the girl.

As I provided the retelling of the story, I envisioned him as a calm, wise mentor. A red cloak for him would have sent the wrong message. When thinking about linking the pages of the book by color, I decided that the borders throughout the book would be the same color as the sorcerer's cloak, to provide a link from page to page and to remind us of the use of color that seemed to suggest magic. The gold elements are meant to pop off the color and provide a sense of shimmer, like the stars in the sky.

The designer who worked on this book also pulled colors from my palette for topography and end papers, and even my signature is created with a gold pen. When exploring color choices, the palettes and colors you choose are important for communicating your ideas and expressions. Knowing there's a purpose behind the choices takes the guesswork out of deciding, what color should I use and empowers your work with meaning.

8/20/2013
Color is a fundamental element of our lives. Understanding how to use it for visual communication in a variety of contexts is essential for designers and artists. This course is about learning how to use color, not only to create more effective designs, but also to tell a story. Illustrator, professor, and author Mary Jane Begin explains how color intertwines with brand identity, how it affects the mood of a piece and directs the viewer's attention to areas of interest, and how it can connect images or create space between elements. She removes the mystery surrounding the color wheel and color relationships; shows how to layer, mix, and digitally alter color; and use light to integrate temperature, translucency, and contrast.

These lessons are applicable to a number of fields, including graphic design, photography, and illustration, and both traditional and digital media. Dive in and get a fresh look at color that is sure to revitalize your creativity and your work.
Topics include: