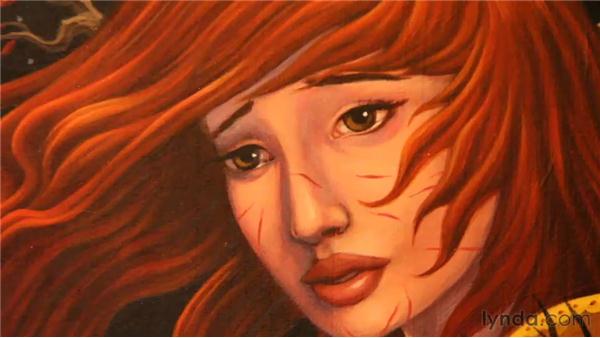 (Music playing.) Sandra Equihua: Hi! I am Sandra Equihua. Jorge R. Gutierrez: And I am Jorge Gutierrez and together we are Mexopolis, a small animation production company. And this is our Burbank studio apartment where we live. We decided to move to Burbank because this is the center of the cartoon universe. Disney, Nickelodeon, Warner Bros., Cartoon Network, all the studios are here, and we hate driving.

So this is the perfect location for us. Also, we always move to wherever we work. So this was a natural decision to move here. This is where we sort of do the creative part of our job and then after we come up with our ideas, we go to the big Hollywood studios down here in Burbank and that's where we literally go to work for a production. Sandra: We have been working together nearly forever. We are living proof that a married couple can actually work together.

We have been together since I was 17 and Jorge was 18, and here we are, working together, being happy and working on stuff that we like. So if you guys want to come up and follow us that'd be great. Come on up. Jorge: Welcome to our home studio. Bienvenidos. Sandra: Ta-da! Jorge: This is one of our bookcases, full of... This kind of defines our philosophy and aesthetic in a way. You'll see a lot of Mexican folk art. Just like most animation nerds, we collect toys, except we collect folk art Mexican toys and from different states of Mexico.

Up here, we have a lot of our day-to-day iconography. We love calaveras and skeletons, paper mache. We sort of put it all together. So this is our Day of the Dead altar. Day of the Dead is a tradition celebrated in Mexico and a lot of countries in Latin America and it's a tradition where on November 2nd you put an altar to your loved ones who passed away and you put their favorite foods, some of their favorite games, and you remember them, because their spirit comes back to you that day and it's a very festive celebration. It's not sad at all.

I was very close to my grandfather who was a big time general and the grandfather in El Tigre is based on him. So for the first time we did a little altar for him. And the first Emmy that the El Tigre won, it's now won six Emmys, but for different things. For storyboarding, for art direction, for directing, for -- Sandra: Background design. Jorge: For background design. And what was really great and really sort of rewarding was that both of us won for character design. Like individually.

Actually this is yours. Sandra: Yeah, this one is yours. Gimme that. Jorge: But Sandra won before I did. Sandra: But it was because of you, thank you so much. Jorge: I was really happy and really proud. But particularly I felt like my manhood has been challenged, like "I have to win one too!" And sure enough the next year I won one. So it was very rewarding. Sandra: I expected you wouldn't say that. Jorge: But it's all thanks to you! This is the first painting that got me addicted to paintings about loss and what I mean by that is, a painting where the artist was making it as they either broke up with a girlfriend or their wives left them or there was some sort of relationship ending.

I am of the belief that from pain comes great art. So what's the most painful time for a young artist? When love ends. I wanted to buy this piece from Gerald De Jesus, this great artist, and he said it was too painful. And then one day he just gave it to me. He said, you can have it. And I just love it. It's this beautiful girl and this dead baby hurting her with barbwire. I don't want to ask him what a lot of this stuff means, because I am have been imagining these horrible things. Sandra: He kind of leaves it to our interpretation as well, so yeah.

Jorge: But he is a fantastic, fantastic painter from Art Center who ended up-- literally started as a background anchor on the show and worked his way up to art director and then won an Emmy. Sandra: Thanks to Jerry. Jorge: So he's one of the big success stories from the show. Sandra: Okay, so this is our studio. This is where Jorge and I collaborate. This is where the magic happens. As you can see, the room is pretty small, but we have learned to work together very well. A lot of our stuff that influences us are on the walls. For example, James Otto Seibold who we totally love.

He is one of our idols and that's another thing. We totally coincide with a lot of things that we love too. That's why I think we can work in the same room, because a lot of the stuff that he likes, I like and a lot of the stuff that I like he likes. But then there are also things that I just don't and I can't stand. For example, sorry, Jorge. I really love his artwork, it's inspiring, it's inspired me to do things that are organic and crazy and colorful. Like that! Jorge: So this is an example of-- Sandra: No, not like that! Yeah.

Sandra: Of difference. Jorge: Of Sandra's artwork and what I do. And as you can see, Sandra's stuff is very delicate, very tasteful. People even wonder like, is she doing this with a computer? Because the stuff looks so perfect and exact. But then my stuff looks like a crazy drunk man did it. And I love to paint things that I can't do on the computer, which is messy, dirty. I love finger painting, sometimes, most of the time.

I never know when I am done with the painting. Jorge: It just keeps-- Sandra: Evolving. I feel like when I paint, the canvas is calling me out and I have to beat it with paint. Sandra: Mary Blair is huge influence on many an artist and Jorge and I are no exception. She is the amazing lady that helped out Disney on many things. One of the main things that she did was "It's a Small World." She designed the interior, she designed the character, she designed everything that's in there.

Her work is so whimsical and so child- like and yet it's so hard to replicate. It really is, because her technique is so mastered. It's a craft that not a lot of people can do. Jorge: When Sandra discovered her, it was just -- Sandra: It was enlightening. Jorge: Because there are not a lot of famous female artists in animation. So she became kind of Sandra's Frida Kahlo. Sandra: Oh yeah. Jorge: This is another huge inspiration in our work and it's the films of Italian director Sergio Leone.

The father of the Spaghetti Western and as we were saying earlier he had never been to America, let alone Mexico, but when you see his films, the Mexican characters are these over-the-top crazy caricatures of what Italians in the 60s thought Mexican cowboys looked like, but he's become a huge, huge influence on us. Having giant posters like this is one of the best things that we can do here in our home studio, because we just have all our inspiration everywhere. So we say like that is our little sort of cave of magic where we get to do our own stuff before we show it to the civilians, before they turn on us with their pitchforks.

Sandra: I personally just like waking up in the mornings and being really inspired by everything. There's nothing like coming into the living and seeing that red wall that we have in the living room. I just love it. In here, it's so visual and it's just so inspiring and I hope that we are just going to keep on adding and adding until we can't see the walls. Jorge: This is Mexopolis right here. A little chunk of Mexico in the middle of Burbank. Sandra: Yeah, and it's our inspiration.