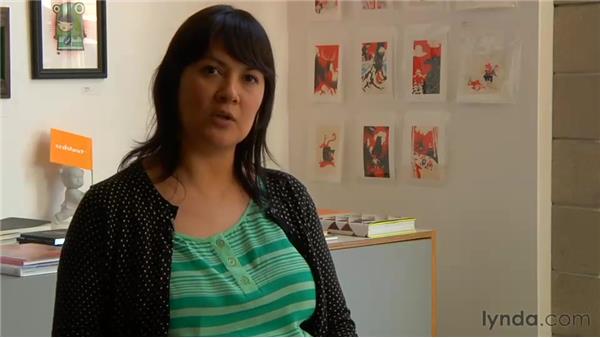 (Music playing.) Sandra Equihua: We're here in San Diego at the Subtext Gallery where I recently had a show with two other artist friends of mine and the name of the show was called Three, as you can see. I'd like to show you what we did. Come on in. In this case, the entire story behind the paintings was the joy and the whimsy and the happiness that a new life brings.

Last year, the show that I had here at the gallery had to do with a loss that we had and we had just finished doing our show at Nickelodeon Studios and unfortunately, it came to a halt and when I did, it really broke my heart. I had felt like something in my life had died, a part of me had died, so I really needed to release in a certain form and I did it with paintings. I was fortunate enough to have friends here in this gallery that allowed me to show my work to a lot of other people.

After the loss, came the birth of something new and wonderful, which was my baby boy and he was the total inspiration for this show. So my first piece is called "Jean Pierre Proudly Poses in His Skates" and I'd like to think that he has a little flat in Paris and he looks out every morning and he drinks his little cappuccino, and he goes outside and he flirts with the ladies as he is skating and he skates back and he spends the afternoon in the park and he chases birds as his job and so forth.

A very dog kind of life, very light, and almost for a story for a child. Mr. Ducks is a duck that wishes he was a human and he is just a fictional character and he just keeps on getting into all these adventures and in this one, he is sailing with his crew, just sailing along in the moonlight and his crew doesn't really even exist. It's just in all in his head. He gathers a bunch of people and he puts them inside his boat and they go off in the night. Yeah, these things are going in my head and the more I start painting, the more ideas start coming in my head, and I apply these little stories into whatever paintings I may be doing.

I chose to study graphic design because I was really attracted to what is graphic. Initially, I wanted to go into architecture because I hadn't heard of graphic design yet but as I started nearing graduation in high school, a friend of mine actually told me that graphic design existed. He introduced me into what is the graphic arts and I really, really liked it. So I decided to study graphic design in the same school he did. And I went in and the more time I spend in the school, I realized that it branched out into different things. Industrial design, modeling, painting, fine art and all that other good stuff.

I decided to take an Art Center at night course with Rafael Lopez, who happens to be an amazing artist centered here in San Diego and he actually happens to be from Mexico City as well. His colors are so vibrant and amazing. He was so willing to teach us about his techniques and the subtext and the substance behind a painting or what it should have that really excited me. I really wanted to start dabbling this a little more and I really liked the freedom it brought with it.

So I kind of started looking over towards illustration and I started looking into more people and more artists that did this as well. When I moved up, I found myself kind of shedding my graphic design skill or my graphic design skin. And then I noticed that I was drawing a lot of characters, painting a lot of characters, and a lot of portraits of characters and these were kind of telling stories and with that, I began to help Jorge design freelance for some animated shows and I found myself submerged again in another branch of the arts.

It's a different chapter in my life. The last show that I had here at the gallery was about tears and there was lot of blue and there was a lot of hate too. A lot of anger in the pieces and then the pregnancy hit, the baby. The newborn came and the joy began to come out again and the colors began to change. The lines that I used were a lot more free than the other ones. The other ones looked like they were prints. Everything looked like it was done with a ruler. Very sharp, very angry. This is like, you could see like there are errors and I don't care because I'm just so happy. Like it's totally reflective of what I was feeling.