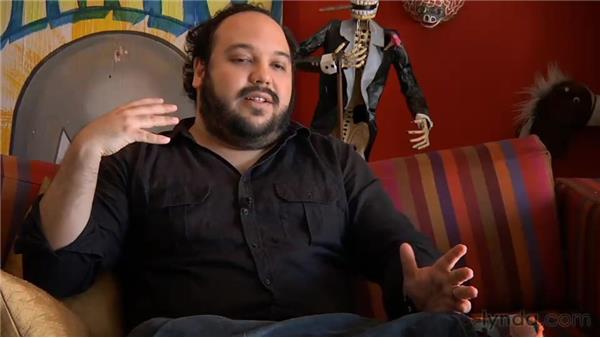 (Music playing.) Sandra Equihua: Jorge and I decided to pitch something to Nickelodeon, a brand new project, a brand new idea. And we decided to come up with it and base it on ourselves. Jorge Gutierrez: Let's put literally all our lives into this and the superhero stuff will be the frosting on the cake, but the cake will be our lives, and so with El Tigre, that conflict came from my family.

When I was a kid, I idolized two people. The two biggest heroes I've had in my life were my grandfather and my father. My grandfather was this big name general in the Mexican army. He was literally in charge of the Mexican army in the late 1960s and he had this crazy office. The carpets were red and all these animals on the walls and murals of guys getting their heads chopped off and guns everywhere. And I remember thinking like my grandfather is a super-villain.

I would go talk to him and he would have these private meetings and stuff. He dressed like with all this military stuff. And he literally, I thought like he was a super-villain. On the other side, I idolize my father and I would go visit him at his office when I was a kid and he was an architect and it was a polar opposite of my grandfather. The carpets were white. They had all these clear tables of wood everywhere, all these drawings on the walls, and I remember like I would go to him and I would say, "Papa, can you draw me a dinosaur?" And he would like be drawing a house and he would literally like go "Yeah, yeah," and he would grab a piece of paper and draw me like this perfect dinosaur, give it to me, and then continue drawing.

My dad would draw me these things and I thought, my dad has super powers. So that's kind of how I saw my grandfather and my father, as a superhero and a super-villain. All my aunts would grab me and I had giant cheeks like now as a kid and they would say like, "You are so much like your father and you are so much like your grandfather. What are you going to be like when you grow up?" So that was the question I got asked all the time as a kid. Are you going to be a general or are you going to be an artist like your father? So that's where the El Tigre story came from.

In the story, in the show, El Tigre has a best friend named Frida and Frida is based on Sandra. Sandra: We're like why don't we just go off of the relationship we have, which is very like friends? He is my best friend, honestly he is my best friend, and I'll back him up with whatever he wants to do. That's what the characters are technically about. Jorge: And we said, you know, this new show, let's invest ourselves in it completely.

And what I mean by that is, obviously we are going to be working on it and killing ourselves on it. But let's put our -- literally cut our veins and put our blood into this project and let's base it on our lives and let's base it on who we are and everything we grew up with and our personal experiences. And so we start with these little nuggets of things that happened to us and then we elaborate and embellish and then add the superhero stuff at the end. And the look of the show is very much a love letter to Mexico and Mexican culture and Tijuana.

And it's the celebration of everything that's Mexican and this idea that Mexicans have sombreros and mustaches. Well, every man in El Tigre has a mustache and a sombrero. We basically start, we celebrate all the craziness. And the idea was, you think Mexico is crazy? It's way crazier than you ever thought. Sandra: Nickelodeon had never really had a show so Latino filled. I mean it was almost like having salsa pushed into your face. It was so Latino, it really was and they were loving it, because it was so colorful and the characters were so out there and so different, that they decided you know what, let's give it a shot and it got on the air and they loved it.

There are a lot of roots in El Tigre and the characters. Our aunts are in it, our uncles are in it. The world that we grew up in is in it. Tijuana is where I grew up and he grew up in Mexico City. There's a lot of that, and there's like a merging of the two worlds. Jorge: Eight Emmys later and a bunch of Annie Awards, including Best Show. The National Cartoonist Award. The show was canceled after 26 episodes. Sandra: And when you dedicate so much time to something for such a long time, it hurts when it's taken away from you.

It kind of became our pseudo child, because you invest so much time into it and you love it so much and it just hurt me. Jorge: The way Sandra reacted to the show was a little more emotional and she literally was devastated. The way I kind of approach stuff like this is in a way the way I approach death, and Day of the Dead, which Day of the Dead is a celebration of that person's life.

It's not a loss. It's not mourning for their death. You are not even acknowledging that they are dead. You are celebrating all the goodness. So literally my grandfather passed away while we were working on El Tigre and of course I was bummed out, but I was so happy to celebrate his life and in a way when El Tigre get canceled, that's exactly how I felt. I thought we got to make 26 episodes. A giant studio gave us all this money, we got to blow it making cartoons, we got to hire our friends.

To me, the getting canceled part didn't really matter. It was, we got to make it all this great stuff and wow! Now, we get to make even more stuff somewhere else. It's this time in our lives that just brought happiness to everyone and has done so much for everyone's career. It's pretty spectacular. So, I mean looking back, I don't remember any of the bad stuff. And even when we got canceled, I kind of thought, that's great, we got to make 26. I was just thankful.