El Macho vs. the Mariachis of Doom 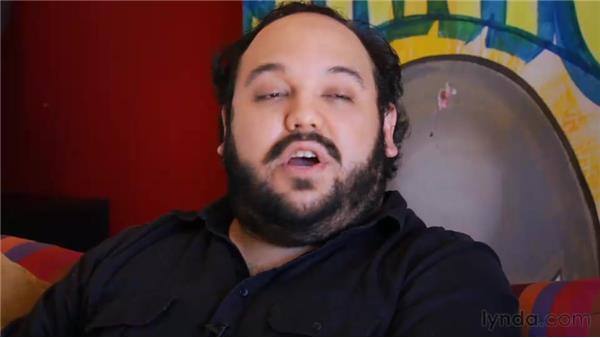 So I literally went to my dorm. I started coming up with Internet show ideas. Final job fair comes around and I get these-- I finish my CG film. It did really well in festivals, it won the Student Emmy. I got to go to the Cannes Film Festival. It was amazing but I didn't want to do CG. So I start getting these job offers to work as a CG look development artist or CG layout. I remember telling my dad like, "Dad, I am going to turn all this stuff down because I want to do my own stuff" and he was livid. He couldn't believe it.

He says, like, "Jorge, you are telling me that you are graduating from school, you are getting these great job offers, but you want to pursue your own stuff?" Like "What's wrong with you?" "You need to pay your dues, you need to get a work visa, you need to assimilate American culture, then maybe 20 years you can give it a shot and do your own stuff, but you need to stop dreaming and jump in there into the workforce." And at this point I've been dating Sandra for eight years. She put up with me all CalArts and I had proposed to her without having a job,.

And I felt, oh man, this is going to be big if I'm turning down all these jobs but I really wanted to do my own thing and I don't think Sandra will respect me if I'm like a miserable CG animator. So I turned down all these jobs. I finished this tiny Internet cartoon called El Macho vs. The Mariachis of Doom! And there was a website back then called Icebox. And they had an amateur thing. And so I submit my little Internet cartoon to that and it goes up and it gets like 200,000 hits in a day and immediately I start getting job offers to do Internet stuff.

But they weren't like "We want to do your shows." More like "We are looking for a Flash animator, we are looking for a Flash director." And I was like no, I want to do my own thing. Meanwhile the window of CG jobs are closing and I started to get nervous and I start calling people back and they're like "well, the job's gone," and so I have started to feel like, oh no, maybe I missed it. And sure enough, my old boss at Sony who was the guy who gave me the internship, says, "Sony Pictures are starting their own Internet division and they're doing digital entertainment, and we're actually looking for shows and we saw your thing on Icebox.

What if you come to Sony and you make your cartoon here?" I was like, "Well, let me think about it. Yeah!!" So I called Sandra. I go over to Sony. I was super excited. It's like a room with executives and back then I had no idea what I was doing. So they sat me down and they are like, "Okay, we want to buy your show. We wanted to do 36 episodes. How much do you think budget-wise it will cost to do one episode?" "Take your time." I started thinking about it and in my head I am like well, it costs nothing to make the first one.

So if I told them $10, then it's $10 profit already. It's amazing because the first one it was like myself and a friend from CalArts, and Sandra doing voices with me. So I go "I think it's $30,000?" And all the executives looked at each other and they are like, okay, so they approve it. Years later I found that the budget was $150,000 per cartoon, but obviously no one told me.

So it was like going back to film school. We ended up doing all the music, all the voices, all the designs, all the animation and at this point I am thinking, this is the greatest country on Earth. So Sony paid for my work visa, they gave me cartoon, they let me write it and direct it. I thought like this is the greatest country on earth. They just-- you go to school and graduate and they just give you a cartoon! This is amazing! So I proposed to Sandra, we get married, she moved up, it was like the American dream.

It was the greatest thing on earth. What was it? Like a year into it, they bring us into a room. 9/11 had happened in September. This is a month later and the president of the company, he was crying. He has two lawyers and we're all in this room and he was like, I'm sorry. We have to close down the studio at 3 PM. All the hard drive will be locked. You guys have until then to grab everything you can from the network and that was it. That was the end of Sony.

So I had a work visa that only allowed me to work for Sony. I had just married Sandra, she had just moved up, and I had no job and two shopping carts full of equipment and I remember like looking up at the heavens going like, "Is that all you got? Come on!!" So we setup our studio in Culver City. Thanks to having made a cartoon, immediately I was sort of branded as a creator. Like having had your own internet cartoon, a lot of doors opened and then I've got an agent and then it all changed.

Video: El Macho vs. the Mariachis of Doom