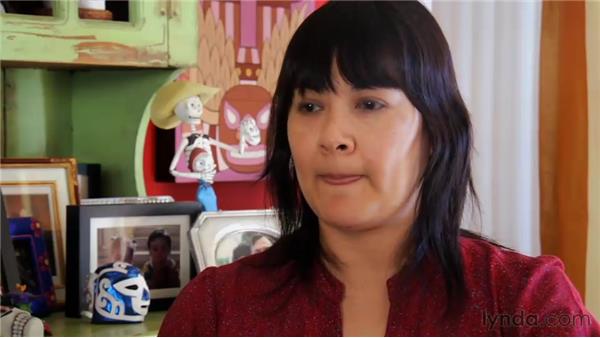 (Music playing.) Sandra Equihua: I was often looking for graphic design gigs in Tijuana and it was kind of hard. People are constantly fighting against each other to find a job. So for me to find one back then was awesome. I found a company called Fotographica, which took me in, and they taught me the very basics of it and from there I took that and I decided I don't think graphic design is for me.

Sandra: My thesis was based on the fact that a lot of kids in Mexico are interested in animation. Unfortunately, they are very limited in the mindset that in order to make something you need money, you need a lot of funding. Which is true if you want to make a very large project, but even so nowadays with the technology that we have-- Like Flash is so functional, Harmony is so functional that you can make anything that you want with it. Jorge: Any one in Mexico can make a cartoon without having big expensive equipment.

If they make it in Flash, they can put it online and the whole world can see it. And the way to prove that theory was she herself did an animation piece. Sandra: I got my Bachelors in Tijuana, Baja California, Mexico, and my school, which happens to be Ibero, Iberoamericana Noroeste, a wonderful school. I learned a lot. Great teachers, wonderful students. We fed off each other and our creativity.

I have got a lot of backing from them. They were like "You know what, let's do it, but you have to do an animated shot that has to deal with our culture." Because I was ready to just to do something very experimental and crazy and they are like, "You have to portray something that has to do with Mexican culture." So I chose to show in a very childlike way, like very cutout kind of way, the domination of Aztec Empire. And legend says that there was a woman called La Malinche that took Cortez and his crew to where the Aztecs were and they dominated them, they completely wiped them out.

That's what the legend says. Due to a woman, the Mexican Empire came down, the Aztec Empire came down. It took a while, it took me a long time, and I finally finished it. And I better have, because my father said that if I didn't, I was never going to marry Jorge. Even though he was on his deathbed he was still telling me, "You finish your thesis or you will not marry that boy." I was like, "Okay fine." And I finished it and I finally got the yes from him and I passed. I passed with flying colors. Jorge: She shows her thesis to her whole department and her father and mother are there, and my father and my mom are there and I think that's the day her dad got it, like realized there's something about Sandra that's unique about her and he had no idea what she's been doing those four years, and when he saw that finished animation, I think it clicked with him like, "this is what my daughter was meant to be and maybe Jorge is not such a bad guy. Maybe with these two crazies could do something good." So I think like she had her own journey and to this day, I think her dad from that point forward became very proud of her.