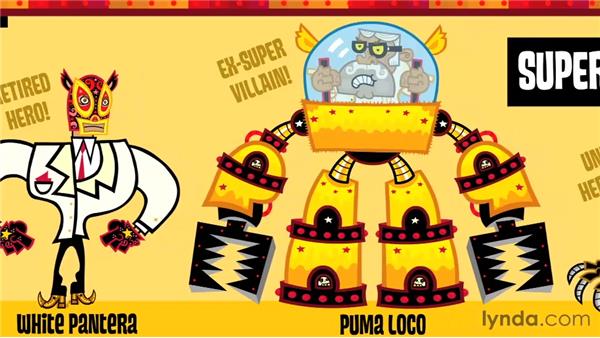 (Music playing.) Jorge Gutierrez: Some of these villains, they were based on personal things that we grew up like that might have not made much sense to anyone else but us, but it made them really unique. When I was growing up, my father had this bear rug on the wall and he always told me the story as a kid and it's that he was somewhere in the mountains in Mexico and he saw a bear coming, and he said, "I'm not going to run away from a bear." So the bear came after him and then bear stood up on two legs and he raised his paw and he slapped my father in the face and apparently they had a slapping contest.

Until finally my dad was all bloody. This is the story my father told me when I was six. He was all bloody and he said the blood of his hands just boiled through him and he slapped the bear one final time and killed him with that slap and then took him home and took the skin off, put it on the wall and that was his trophy. I loved hearing that story from my father. So when we came around to making El Tigre, we made this giant big, thuggy guy that has literally a bear skin on his back.

That's, for example, something where it's a very personal story and it just made the design very unique. I do think the fundamentals of figure drawing and construction and anatomy, all those things apply. At the same time, I think designers are born with a sense of, we call it, the flair. That's like a style and it feels unique and has a point of view. And it feels different. I was taught by this great designer, Maurice Noble, to not draw until you knew who the character was.

So I really, really took that to heart and what he meant was think about who this character is. Think about what's his life. Where is he from, what part in his life story, what part of that are you in right now? Like his great days behind them? Is he on his way to doing something, is he about to fall, like where is he in this timeline? And I really think about all that stuff before I draw. Sandra on the other hand seems to be more about finding the voice of the character as she is drawing it and there's no right and wrong.

I mean everyone designs in a different way. It seems that she finds her stories after she has designed and I tend to think about the story and design the character around that. One of the things that I learned in experimental animation, especially from Jules Engel, was not to look at other cartoons and not to look at other animation for references. Obviously we're all going to look at things and we'll be inspired by everything we see. But he specifically said, look away from what's being done and what's been done before and look into other disciplines.

So for me, I looked at Mexican folklore, Mexican folk art. I really got into certain painters and Jules would say, "Oh, you love Picasso? Then look at African masks." If that's the stuff, that period of artwork that you're into, look at his influences and keep going back and keep going back and that really informed the way I draw and the way I design things. Hopefully, when you looks at my designs, you don't go, "Oh! He likes UPA and Hanna- Barbara and 1940s Tex Avery stuff." You go, oh, he likes Miguel Covarrubias and Day of the Dead and oh, look.

There is a little Goya in this color scheme. So hopefully you will see a little more outside of what people see in animation. If drawing perfectly, beautiful constructed drawings was all that mattered, then all the TV shows will look exactly the same and I think it's those different point of views, those different perspectives of how to approach artwork that gives us all that variety.