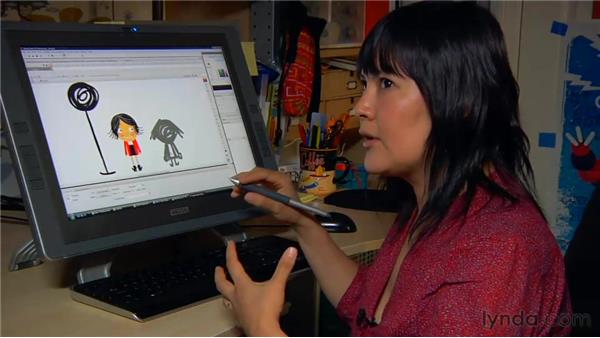 (Music playing.) Sandra: We have a new show, a new project with Disney. And I am proud to say that I'm taking a little more of a lead in that. So I am going to give an example of kind of what they look like. For example, if Carmen, our main character, was supposed to have a best friend or a new friend, the friend would technically have to look good next to our main character.

Our main character's proportions are technically a lollipop. It's a circle, a positive thing, and then she is just a stick technically. So we're going to give her a round head, a stocky body, and tiny little feet, but she's kind of punk rock herself. So let's say we are going to give her boots later on. This is just a quick sketch of what it's going to look like. Now, once we have the outline, what we are going to do, I start building based on the shapes that already exist.

Like I'm totally going for an outcast because our main character Carmen is kind of the champion of all outcasts. She is like the patron saint. So the cuter and more outlandish the characters are on Carmen the better. So we go into the hair and that's when the fun begins. You can make it a little more like this. And then, more like-- Oh, the eyes are a little too big.

So we go in, make them a little smaller. Let's give her black hair, like so, and they have a uniform. So we're going to take her skin tone, like so. And we're going to give her a nice gradient. We can put it under her stuff, under her eyes. It's a fun thing about Flash is that it's very much like clay, I like to say. And we have got a character.

We could push her a little more. Like this character I've decided to call her Amelia, just because it's kind of like an old school name, kind of like a lonely kind of person, shy. We could still push her a little more. We can get this design to work a little more in making her look like her character. Let's say for example her background story is that she had no brothers and sisters. Her parents were too busy to take care of her, so therefore she had to make imaginary friends by herself. Her only friend and true ally was a stop sign back then, and our character looks like a stop sign.

So therefore she finds some strange sort of attraction to her and follows her around everywhere. And she doesn't really like her, but she doesn't care and she will trail her forever and she will be her psychic for the rest of her life, even though she doesn't want her, right? So we can make her even nerdier by taking her features, bringing them down. Let's just bring down, make her a little bit hunchback, even making her body a little smaller, meager.

Maybe even bringing in the eyes a little more. Maybe she will look a little weird if she wasn't that feminine. There you go. Immediately she loses that cute quality with the eyelashes, to make her wonky. And there we go. She is that weird person that hangs out with you and hides in the back of bushes and follows you around. And if we want to make it more nerdy, we can go in and bow leg, make her bowlegged. Make her more of an outcast in the world. Okay now let's use a big tool here, like so.

It's really bowlegged. That's awesome! And there you go. I got her legs. We get the same color of socks. Let's make one sock go down, and the other sock go up, because Amelia doesn't notice these things, but sometimes she is walking and her socks tend to go down. There we go, and there you have Amelia. And by looking at her, you can instantly tell by her bowlegs and her hunched demeanor and her freckles and her crazy zits and her own dark circles,and her buckteeth that she is an ugly duckling.

But at the same time, she is kind of lonely. She has got this happiness around her. And she had got that humongous dome of a head that's just saying, I'm a good person, I'm just kind of lonely. That's about it.