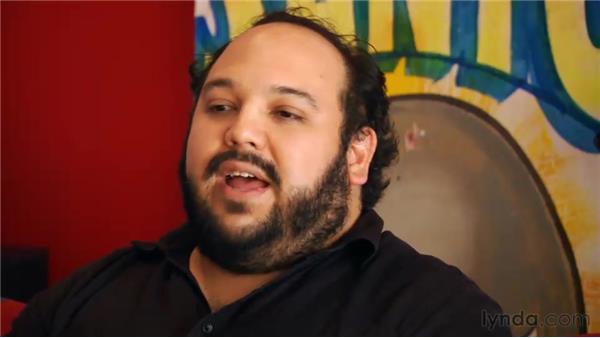 (Music playing.) Jorge Gutierrez: Nothing fueled my fire more than being told this a weakness in your work that you constantly represent where you are from. Like the more people told me that the more I wanted to do it. All of our favorite movies, favorite books, favorite records, they all share one thing, which seems to be that they are all personal stories coming from those specific artists, things that happened.

Like usually my favorite films are filmmakers' first films, because they are about where they are from or their personal experiences. And I thought, well I'm going to do that. I'm going to concentrate on doing my own version of what a cartoon is, my own version of what a animated film is, but just coming from my point view of Mexico. But then I thought, there are a ton of Mexican films and a ton of Mexican art that don't translate outside of Mexico. So how do I make stuff that's super specific to where I am from, but universally...

accepted and understood? And I think it's in the stories and just have the culture be the backdrop to the drama. It's like El Tigre. It's a kid but he could be from any culture. It just happens to happen in Mexico. (Animated kid: Ohhh, jet packs.) One of the things that I loved about Mexican folklore was that it was popular art. Artisans are constantly making it, its constantly evolving and it's very accessible.

Kids buy it. It's everywhere. And you go to the butcher shop and there are these amazing butcher painting himself murals. So it was very relatable in that it was for the people and it was popular. And so the imagery that I was trying to use was imagery that spoke to all ages, that spoke to the most sophisticated and educated of men, to the most small child.

Like these big giant lessons were in these murals. And I thought they use Mexican folk art. They use all these iconographies. I want to use them and I want to use them in cartoons. I have never seen them in cartoons. And I was 14, 15, these Mexican bands, Cafe Tacuba was one of the first ones that I heard started using traditional Mexican folklore music and they mixed it with punk rock and techno. They mixed it with sort of American and European music and it sounded amazing to me.

It was like pleasing my grandfather and it was pleasing me and it connected us in a way that I'd never seen. And I thought if they are doing that musically, I want to do that visually and I want to do that in films. Now, I take it as a personal sort of challenge to make Latin and specifically Mexican culture not only something that is accepted in the mainstream but looked at as something normal.

That's just there. Just a way-- I keep saying like, I want Mexican cartoons to be like salsa. Like people even question it. It's there, they love it. I mean the food, not the music. It's just part of American culture. I want to make my son proud of where he is from.