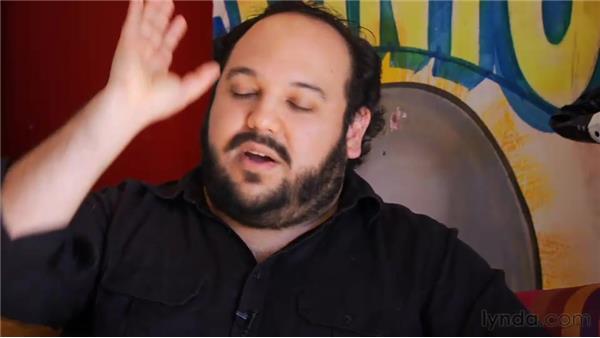 (Music playing.) Jorge Gutierrez: I was born in Mexico City and like all children, I was a disappointment to my father. On my mom's side of the family, everyone was in the military and from my father's side of the family, there seemed to be more artists and specifically my dad is an architect and so he considered those to be serious arts. When I told him as a kid that I wanted to be a painter, he thought, well, that's like saying you want to be the Pope or be an astronaut, but it's not going to happen.

And then I would you hear like, oh that guy didn't make any money, he died and then his paintings became famous, stuff like that. So I started going, oh no! If I grow up and I want to be an artist I need to do something where I can make money. So I thought, oh, I'll do cartoons and comic books. And I told my father this and he was appalled. He was very, very disappointed. He started pushing his agenda of maybe you should go to school for architecture or for graphic design. And then if your whole painter thing or comic book thing doesn't work out you have a real degree and a real art to fall back on.

And then you can do all your other stuff on the weekends and at night. I laughed at my dad and I said, what do you know? I am going to show you, Dad! Sandra Equihua: I am originally from Tijuana, Baja California, Mexico and I came to a family of all doctors and academia people. My mom was a teacher and my dad is a teacher and he was a professor, an anatomy professor, and my dad would be giving us anatomy lessons when we were like nine, seven, five years of age and he would gives us 25 cents each if we knew the parts of the cranium.

And I was just not paying attention. I was just off doodling with crayons and markers on, I don't know, on the floor or on the wall because I just had no interest whatsoever in medicine. So although I didn't start in animation, I kind of smelted my way into it. I studied graphic design. I actually got my Bachelors in that. It was the closest thing I could get to animation. When I was in high school, I was actually going to go off and do architecture. I was very interested in it, but it was a little too cold for me.

I need a something a little warmer, something like that could come from -- I don't know, not that architecture doesn't, but from my soul. That I could do with my hands, that I could love. I started dabbling in illustration and I started dabbling in drawing characters and then Jorge, my boyfriend back then, husband now, we've been together forever. Since we were 17 and 18. He actually went to CalArts and he studied experimental animation while I studied graphic design. So we both had our own worlds and we were both growing creatively and we had so much to share every time that we would come down and see each other, just exchanging ideas and projects.

I always thought that my dad was like not very proud of what I was doing and it wasn't that he wasn't proud because he wasn't paying attention. He just didn't understand it. Jorge: And here I was the physical representation of everything her parents wouldn't want in their daughter-- Someone who wanted to be an artist and who encouraged Sandra to be artist. And they gave her these crazy curfews. Like she was 22 and her curfew was 10 p.m.

And it was like - it was Gestapo, like investigating all everything we did. It was horrible, but it was really exciting, because I was trying to steal this great artist girl from this family. And to her, it was like a smoke dream to be an artist, it was so far away. Removed from her. Like she was going to graphic design school and they certainly didn't make any effort in that school to imply that you could make a living doing your own stuff.