Breaking into the industry 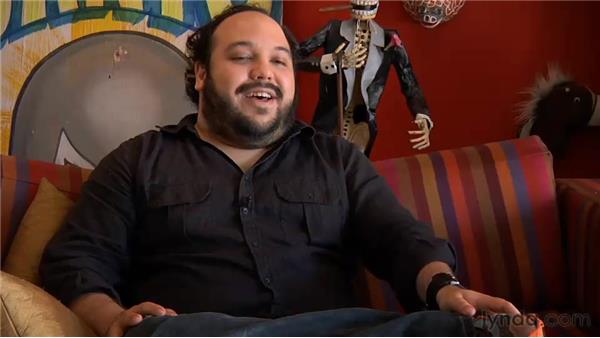 (Music playing.) Jorge Gutierrez: While I was at CalArts, I kept exploring Mexican culture. My long life love affair with Mexican popular culture, Mexican wrestling, Day of the Dead, everything that I love about Mexico I kept exploring in school. And so all my films literally dealt with all that. And I had two bands of teachers.

The more artistic teacher says this is fantastic that you are exploring your culture, and some of the more realistic teacher said, well, you are going to get in trouble when you start looking for work, because this work is so specific to that country, that people are not going to see past it. At that time, I thought well, either I am going to get really good at pretending I am not from Mexico or I am going to get really good at being a Mexican artist. So I rolled the dice on my country and on my heritage and I would go to the studio and I got the same response I got from back in CalArts.

People would tell me like, "you have no TV experience and all we see in your portfolio is all this Mexican stuff and frankly, while it's great to look at and it's great for diversity, we are not making any shows with those themes or those looks. So we can't hire you." And I got rejected at Warner Brothers and Nickelodeon, Disney, literally every place turned me down. And one producer at Nickelodeon took me aside and said, "Hey, I love your stuff and I am going to be 100% honest with you.

No one is going to hire you to do this stuff. The only person who can hire you to do this work is you." And he said, "you have to pitch your own show and then you can hire yourself to do all this Mexican stuff." It's up to you to get something in the air that looks like this and then, that's it. You hire yourself. It seemed so easy at that time. I thought well, of course! That's all I need to do, just sell a TV show and I'll hire myself.

So meanwhile, we got approached based on El Macho by Warner Brothers, who at that time they were making a cartoon called Mucha Lucha and it was the first ever Flash animated cartoon and it was about Mexican wrestling. But the creators, who were awesome, were from New Zealand. So I thought, if those guys from Australia can pitch a show about Mexican wrestling and get to do it in the US, I should be able to get something going on this side. So that really encouraged me.

So thanks to Warner Brothers, we started making enough of a living that I -- Sandra and myself-- literally started pitching shows. The first place we went to pitch was Disney and I pitched them this crazy idea called Pepe le Bull about a Mexican super macho bull, and they optioned it and it was one of those because I had done El Macho, that opened that door. By that point, we were represented by an agent. So the agent got us in at Disney to meet the executives.

The executives there liked the show. I went through all the proper channels and then they optioned it, and thanks to that, all these doors are opened immediately. As soon as you had a show optioned, everyone else was going, wow, who is the new guy? It was like the Internet. I had no idea how to do a TV show, so we started from zero. It was a crazy, crazy process. Sandra put up with me during those crazy times. They let me write it and direct it. The show was about this super macho bull and by the time it was done they said, you know at the Disney channel we're looking for shows for girls.

So what if this show is about Pepe the Bull's sister, instead of Pepe the Bull? The show we were competing with was called The Buzz on Maggie, and it was about a girl who is a fly. So it fit exactly with what they were looking for and that director, Dave Wasson, liked Pepe the Bull so much, that he hired me and Sandra and everyone on our crew and basically took us in. So literally I got to work at that point on the first ever Flash show at Warner Brothers, and this was the first ever Flash show at Disney.

So that we were kind of a generation where we were coming in and we were doing things a little differently.

Video: Breaking into the industry